Last year one of my New Year's resolutions was that I wanted to work on a non-business creative project with friends.  Something fun and not my own.  So it was very fortuitous when my friend Tiana Hux contacted me last spring about designing the costumes for her new show, Animal Ball.  My good friends Judy Bolton & Sarah Borealis were signed on to perform in the show, which made it even more fun. 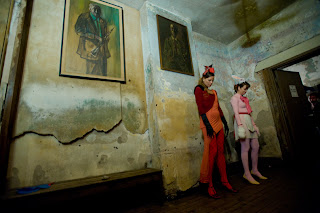 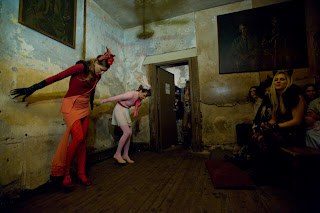 Sarah Borealis as the vixen & Judy Bolton as the bunny

Tiana is a rapper and performance artist, a wildly talented individual and an old friend from New Orleans days.  She asked me to look at Hummel figurines and the illustrations of Maurice Sendak--one of my all-time favorite illustrators. 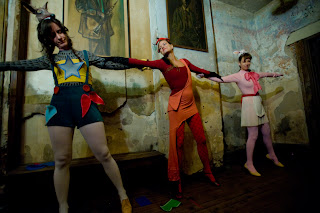 This is right up my alley.  People dressed as animals or turning into animals, dark fairy tales, creepiness, cuteness. 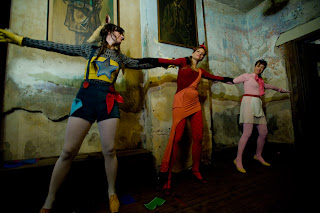 I spent the summer working on the costumes.  I designed head to toe looks and worked with Elizabeth Fisher to make them from scratch. 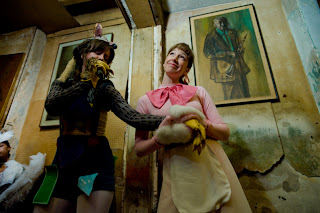 Tiana as the dog/wolf & Judy the bunny
Elizabeth made the bunny costume and Tiana's sporty lederhosen.  Marcus Bronson, who makes masks and costumes and music, made the amazing headpieces based on my drawings.  He also created the music for Tiana's show. 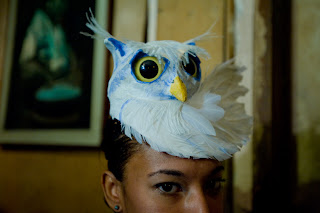 owl headpiece by Marcus Bronson
This was such a fun project.  Each character has gloves or mittens with hand-stitched vinyl claws and fur.
Tiana's dog/wolf and the owl character have hand-painted fur and feather leotards.  This was a great chance to use the "marks" idea I was making over the summer, which will be a major part of the new collection I'm working on right now.
There were also "puppets" that the characters used to tell parts of the story as they danced.  These are the felt shapes you see on some of the costumes.  They are based on the idea of a felt board. 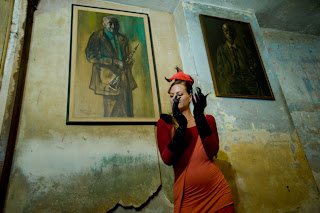 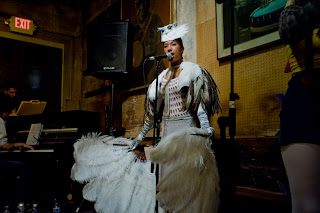 Tiana is hoping to take this show on the road in the next year so hopefully it will be coming to a city near you.  There will also be a video out sometime soon.
These pictures were taken by the fabulous Shannon Brinkman at the premiere of Animal Ball at Preservation Hall in New Orleans
Posted by Fancy Pony Land at 2:34 PM 1 comment: 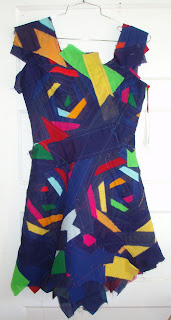 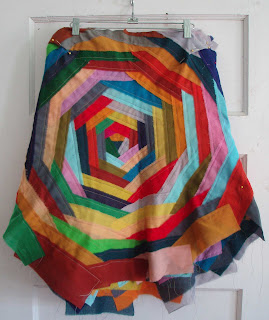 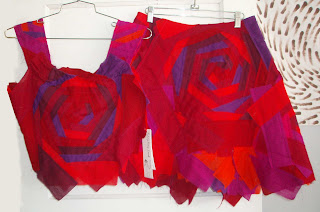 
Elizabeth and I have been busy in the shop lately with bandage skirts and dresses.  I am pretty excited about some of these new color combinations.
It's been in the 70s the past few days and I am ready for spring.
The bandage rosettes have changed over the years.  They've tightened up, become more symmetrical and regular.  Also denser.  And the skirt shape has gotten narrower.  We've really got it down at this point.
I've been making bandage skirts since the fall of 2002.  I started making them when I first lived down in Redford, TX on the Rio Grande.  The landscape was just so wild all around you is geology really telling a story.  Also I was reading about Georgia O'Keeffe and her landscapes and thinking about the sort of dissected layer look of her flowers.  I started tearing up some Indian cotton voile into strips, then cutting into pieces.  I sewed them into a variety of shapes and patterns in the beginning--stripes! Then I settled on the "rosette" shape I use now, which had a nice deconstructed quilt look and also an O'Keeffe flower feel.  My friends Matt Vis and Kirsha Kaechele came down and visited during that time and Matt said, "let me get this straight.  You're tearing up fabric, then sewing it back into fabric?  That's a little crazy."
Still crazy after all these years.
Posted by Fancy Pony Land at 12:56 PM No comments: 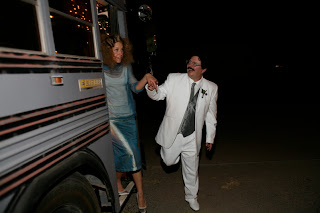 Krista & Adam Bork got married December 18th 2010.  It was a really good wedding. 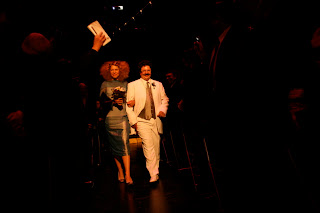 I made Krista's wedding outfit, the one she wore for the ceremony 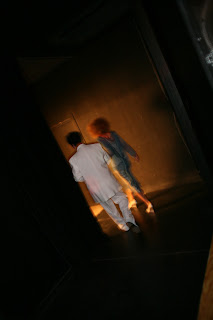 It is made from Indian silk that I got at Sarpal Cotton Plus, my favorite Indian fabric store in Vancouver, BC.  It's a special custom pencil skirt (sari silk) with a back slit and a sheer silk chiffon (sari scarf fabric) tunic top with a scarf neck that loops in the back and dangles down sort of like a train.


This was the first time I'd worked with silk in YEARS and it was an intense process.


At one stage, I made a sample out of some of Suzanne Tick's amazing interiors fabric.  She was kind enough to give me a bag of duplicate sample swatches to think about and this was the first use.


It was also the first time I'd made a wedding dress that was not one of my bandage dresses.
I wanted to make something for Krista that was really her, really something she'd be comfortable in and that expressed her.  I loved this process of collaboration and thinking through someone else's style.
Posted by Fancy Pony Land at 10:12 AM No comments:

Fancy Pony Land
Lorna Leedy grew up on an island in Washington’s Puget Sound. She started out as a reader and then became an illustrator and maker of books. Later, a series of art accidents led her to fashion. Her current work involves drawings on paper and fabric. Leedy’s clothing line Fancy Pony Land, founded in 2002, works with independent seamstresses to produce original handmade garments. These are then appliquéd with vinyl and leather by Leedy & Co. Fancy Pony Land has been shown in specialty boutiques in cities throughout the U.S. as well as in Milan and Tokyo, and featured in national and international fashion magazines. Leedy opened the Fancy Pony Land studio and showroom in Marfa, TX in 2008. Over the past decade Leedy and her Park Ranger husband have spent time in out of the way places such as Isle Royale, MI; Redford, TX; Joshua Tree, CA and Dinosaur, CO, with Leedy operating out of a mobile studio packed into their camper van. After many years on the road they have recently settled down on the South Rim of the Grand Canyon, where they live year-round with their son Hazard and their dog Becky. Marfa, TX is still home and they spend as much time there as possible.